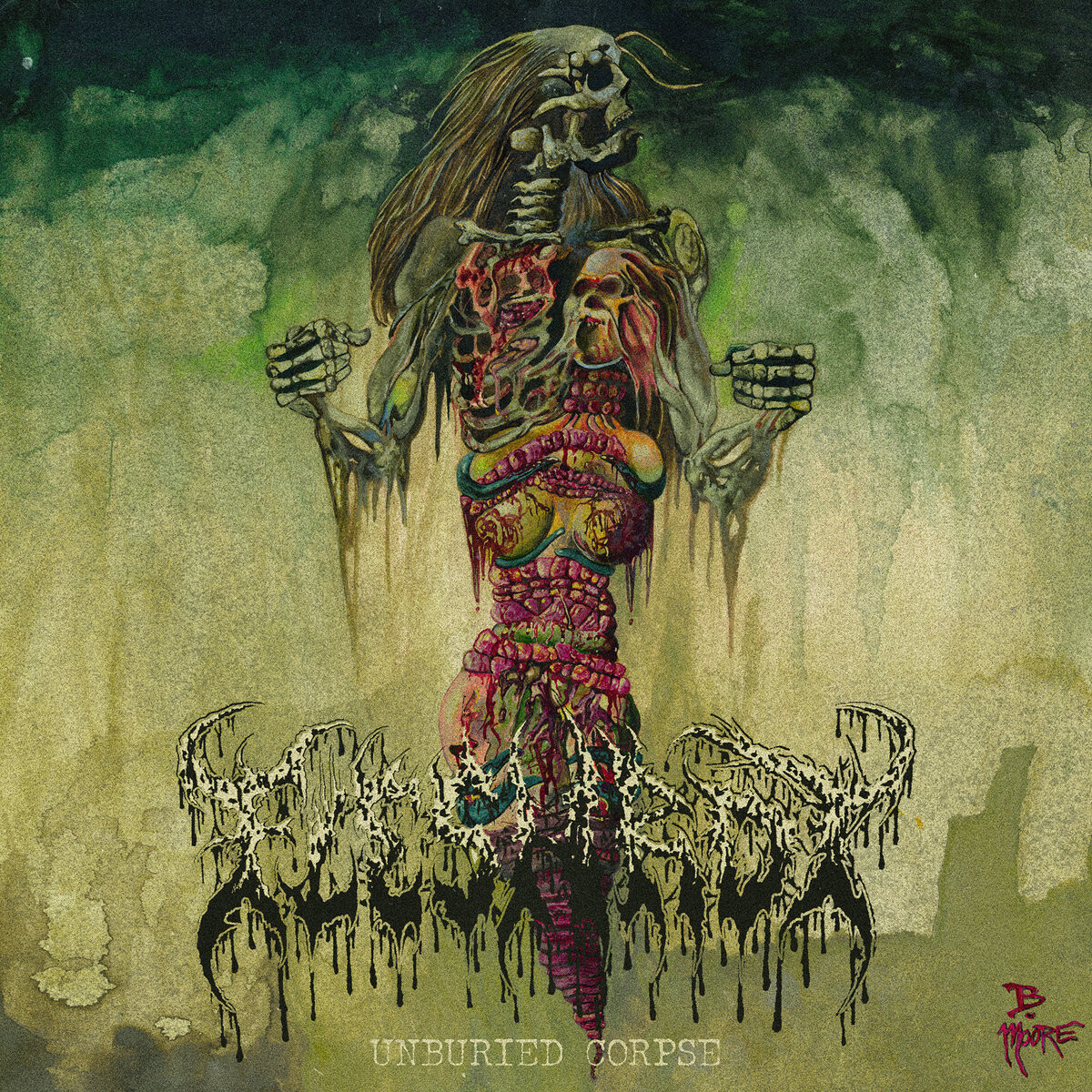 FLESHROT (Texas, USA) - Unburied Corpse LP (2022) Released by Me Saco Un Ojo Records (UK) on Traditional Black vinyl. Since forming in 2019, Texas’ FLESHROT have accumulated a steady fanbase with their rancid blend of slowly chugging Death Metal. With a demo, split and single under their belts, it is time for their debut full-length studio album to finally crush the skulls of the collective underground.

With an immediately gripping assault of hammering, chunky bass, putrescent guitars and guttural vocals, the sludgy cacophony of rotten ichor is even more brutal than ever before on this record, it does not take much time to figure that out.

From Neanderthaloid riffing and belching breaks, the lumbering juggernaut of heaviness has a groove that even the most primitive mind can bang their head to, scattering loose brain matter as the bludgeoning and lacerating sounds cut through living tissue effortlessly. With some bonus savagery borrowed from Grindcore but played at hideously slow pace, this album cannot be accused of being anything other than some of the filthiest and heaviest Death Metal you will ever hear.

Equally, there is nothing trendy or bandwagon-jumping in sight, FLESHROT have their own sound and deliver it with a scathing performance that is convincing in its own right. If progression and technical nuance is what you seek, steer clear, for this is a sub-30-minute slab of pure butchery that is not for the self-proclaimed audio genius (read: pretentious), this is violent, visceral and somehow stinks of rotting meat. With a production that allows seeping guitar wounds in the thick, tarry bass lines while retaining the snappy drums and not allowing the bellowed vocals to overshadow anything, this is a dense and swampy cut of morbid Death Metal that will puke itself forth into your ears, defiling and degrading all it comes into contact with.

If you can withstand the putrefied sonic fruits bared by FLESHROT, then commend your stomach and ears’ strength because most will falter before the mighty and malicious blows landed by their debut LP “Unburied Corpse” in all of its lurking, squelching and squalid splendor. -- Me Saco Un Ojo Records – MSUO-151
Save this product for later
Display prices in: CAD